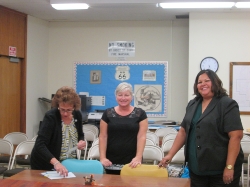 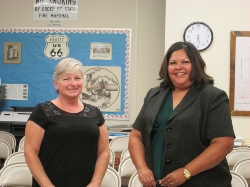 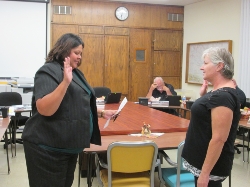 The Needles Board of Trustees conducted interviews and appointed Nancy Vandiver as Trustee for Area 3 representing Big River, Earp, Chemehuevi, Havasu Landing. Following the interview and affirmative vote in favor of her appointment, Ms. Vandiver took her seat on the Needles USD Board of Trustees. This vacancy became open when Michael Sleppy stepped down after many years of honorable service.
The Needles Board of Trustees President Christina Cameron-Otero had the honor of swearing in the newest Trustee, Nancy Vandiver, from Area 3 at the meeting on October 14, 2014.  The Area 3 seat had been vacated by Michael Sleppy recently and the Board of Trustees held a provisional appointment selection process to fill the seat.  Ms. Vandiver is a long-time resident of the Big River area and was formerly an Instructional Aide in Special Education at the Parker Dam School for 12 years. During the interview process, she shared her desire to work for ALL students in the Needles Unified School District while also serving Area 3 students who attend school in three different districts depending on their residence.  There are students who are bused in to the Needles USD school sites, as well as those who attend school in Lake Havasu Unified School District and Parker Unified School District.  Ms. Vandiver's appointment to the board is critical to ensure that all facets of this area are represented and their concerns shared with the Board of Trustees on a regular basis. Ms. Vandiver is dedicated to service as a Trustee and her top priority is increasing student attendance to promote learning.