NEW Trustees Sworn In to Represent Areas 2 and 3 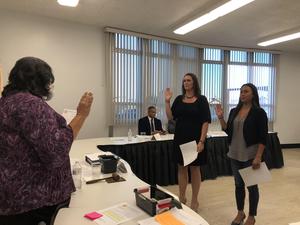 Newly appointed Trustees Sheridan Silversmith (Area 3 Chemehuevi/Big River) and Lana Walters (Area 2 City of Needles) were approved and seated during last night's special board meeting. Board President Christina Cameron-Otero delivered the oath of office following an interview process and provisional appointment. Both Trustees are graduates of Needles High School. Trustee Silversmith has students at Chemehuevi Valley ES and Trustee Walters will have a daughter who will attend our schools in the future. In order to conduct the interview process with less than a quorum of our own NUSD Trustees on the Board, San Bernardino County Board President Hardy Brown II and SB County Board member Ken Larson were sworn in at the start of the meeting, provided their input, and then resigned once the Trustees Silversmith and Walters were appointed. The Needles Unified SD looks forward to welcoming and working with our newest Trustees!